The Mahrattas have become a maritime power

I recently came across a book, "A New System of Modern Geography AKA A New Geographical, Historical, and Commercial Grammar and the Present State of the Several Kingdoms of the World."a It was originally written by William Guthrie, a Scottish journalist, in 1770 shortly before he passed away. The book is a "General Knowledge" compendium of sorts. It tries to touch upon varied subjects, as they were known back then.b The edition which I came across was sixth and was printed in 1792.

Although the book is unknown today, it has had it's glory days. It met the needs of many readers for no fewer than eight decades, and has run through at least thirty editions - involving many corrections, excisions and additions.1 For a book on "Current Affairs" it managed to stay relevant for a surprisingly long period of time. Probably the British equivalent of Malayala Manorama yearbook.

William Guthrie himself was a prolific writer, translating Quintilian and Cicero from Latin. His historical writings include, ‘Complete List of the English Peerage’, ‘History of England from the Invasion of Julius Cæsar to 1688’ in four volumes, ‘A General History of the World, from the Creation to the Present Time,’ and ‘A General History of Scotland’.2
All surprisingly inaccurate, even by contemporary standards. To his credit, his History of England was the first attempt at using parliamentary records for writing history.
However, his greatest work remains "A New System..."

Which brings us back to...

In "A New System..." Mr. Guthrie describes what is now today's India as "The peninsula within the Ganges." He briefly summarizes the geographical and historical details, and then goes on to describe the political divisions of India.
It is here that he describes the "Mahratta States and their Tributaries." In "Southern Poona Mahrattas," which is his way of saying territories of Deccan, he gives the following description of Konkan. 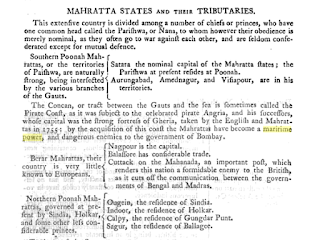 "The Concan, or tract between the Ghauts and the sea, is sometimes called the Pirate Coast, as it was subject to the celebrated pirate Angria, and his successors, whose capital was the strong fortress of Gheria, taken by the English and Mahrattas in 1755. By the acquisition of this coast the Mahrattas have become a maritime power, and dangerous enemies to the government of Bombay."

The Twenty-first edition, published in 1808, appears to be the last time that the Marathas have been referred to as Maritime Power.

Student of Maratha history will know, that Angres were in fact Marathas, and had successfully dominated Western coast of India from 1700 - 1756. The fact that the Peshwa's fleet was considered a Maritime Power only goes on to increase this period of Maratha dominance to nearly hundred years.

However, between 1792 & 1794 much seems to have been changed. The line, " and dangerous enemies to the government of Bombay" is missing in 1794 and later editions.

As we do know, since the British allied with the Peshwa in 1755 to destroy Tulaji Angre, they had been on friendly terms. This friendship was broken by the British in 1775, when they commenced the first Anglo-Maratha war. The war ended in 1782, but a naval action in 1783 - where Anandrao Dhulap captured a British flotilla as well as some senior military officers on board - left the British with a bloody nose, not to mention the further complication of the ongoing peace negotiations. Since then, Marathas have been intermittently capturing British shipping on the high seas. Which is the reason why they've been declared "dangerous" and "enemies to the government of Bombay."
But these Adjectives are outdated for a Current Affairs book. For the Marathas were allies since 1790. And it was Tipu who was responsible for this rekindled Anglo-Maratha friendship. So the book is a few years late in dropping those adjectives.

I won't deny it, it feels good to read about the Mahrattas as Maritime Power. But what is equally interesting is how much the text relating to rest of India has changed, while this statement remained constant.

In 1792, "The New System..." begins the divisions of India as;
By 1794, Marathas are third on the list minus Berar and Northern Poona Mahrattas, Nizam is mentioned independently, as an Ally, in the fourth heading, Next are Berar and Northern Poona Mahrattas, followed by Tippoo. The last item of Other states is unchanged.
That the Central & Eastern Indian Maratha states are being mentioned apart from the Maratha state shows the changing dynamic of Indian politics.
Similarly, the elevated status of Nizam as an Ally and the reduced status of Tipu reflect their political status in a changed India, or at least India as it was perceived in London.

By the time we come to 1808, the divisions of India only seem superfluous and/or pretentious. The mere mention of Peshwa and other Maratha chiefs seems to be a consolation.