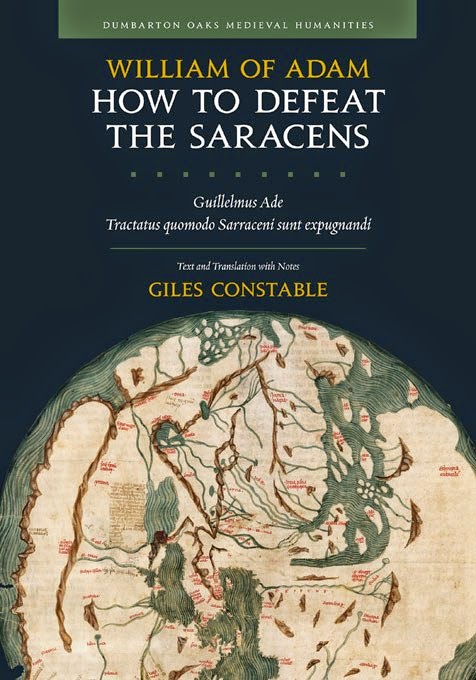 Yesterday I attended a lecture by Prof. Ranabir Chakravarti. The subject was "India and the Indian Ocean: Issues in the History of Politics (upto c. 1500 CE)."

One of the most interesting things which I learned here was about a manuscript by Guillelmus Ade (William of Adam), titled "Tractatus quomodo Sarraceni sunt expugnandi." Which is a latin treatise roughly translated as "How to Defeat the Saracens." 'Saracens' here being the Mamluk Sultanete of Egypt in particular, and Arabs of Middle East in general.

The treatise, which is very polemical in nature, lays a five-fold strategy to destroy the Saracens and capture the holy land. Each of these strategies are elaborated in great detail in independent sections. The last and the most interesting strategy of these is an excellent example of naval strategy, probably on par with R.Adm Alfred Mahan, or Sir Julian Corbett.

Why is it "the most interesting" of the lot? Check out the two quotes from the text below.

"No one questions how great a profit the Saracens of Egypt derive from India by the maritime trade across the ‘Indian sea’ (mari Indico)."
// Note - 'Indian' not 'Arabian' sea.

"For all of the things that are sold in Egypt, such as pepper, ginger and other spices; gold and precious stones, silk and those precious materials dyed with the colors of India; and all other precious things are carried from India to Egypt. .... Therefore, anyone can observe, as I said before, that India is truly and effectively, and not casually or occasionally, the source of all the evils which I described above."

It should be noted that the author was not some tom-dick-&-harry who had an over-inflated opinion of his own skills. He was a Dominican Friar at the beginning of his career. And had lived at Smyrna (Aegean Sea), Constantinople (1307), Syria, and Sultanieh (in Persia under Ilkhanid rule). By his own admission he had " traversed the entire empire (of Persia) as far as it extends."

Prof. Chakravarti has rightly titled this section "Blueprint of a Naval Blockade". This entire treatise was intended for the Pope's eyes. One among many such similar treatises produced during that era. However, nothing seems to have been done about this.

There's quite a lot to write on this subject, but I'll end here. To read more on the subject, please go through the links below.

An article by Prof Chakravarti concerning the above mentioned text -
INDIA AND THE WESTERN INDIAN OCEAN: GLEANINGS FROM A FOURTEENTH CENTURY LATIN CRUSADE TRACT
http://jhss.org/articleview.php?artid=221

Sample preview of ebook -
How to Defeat the Saracens, William of Adam; Text and Translation with Notes. - by Giles Constable
https://www.academia.edu/5929775/How_to_Defeat_the_Saracens_William_of_Adam_Text_and_Translation_with_Notes